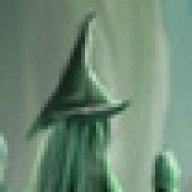 #1
~ On the side of the road, a tall man in a weathered dark green robe holding a staff is bent over talking to something... ~

"Indigenous lifeform.. hah! .. pity."
~ He looks up at the sky with head askew, eyes following nothing but currents of air. ~
"Winds of change, friend. Away, away. move you!"
~he sweeps his staff about~
"Nullity here! Barren blankness!"

~Kentrahl points his staff at the focus of his lecture, then withdraws it back. He raises his eyebrows at a thought crossing his mind. ~
"Comfort? hah no value to it. Change, now.. ahh... the metamorphosis of dark rock to diamond... Character.. 'tis the makings of!!!"
~ He raises his staff up triumphantly at that remark, then lowers it a moment later and points it again and with great purpose at the one he is absorbed with ~
"Move, build! Explore, thicken fleshy walls, transform sterile interiors, decorate with callouses, plague, disease! Bah! talk.. chatter. What use?! Get up, go!"

~Kentrahl clumsily enters the tavern, his staff swinging about as he struggles to bring it, himself, and his small odd pet inside. After making quite a racket with all the banging about, he grins at the tavernfolk and takes a seat at the bar~

"Rum for me, rat feces for Silnah haha"

~ He waves his staff and chants something mostly inaudible. The top of the wooden carved staff glows and a party hat materializes on the bartop ~

"Silnah made another turn of age this day. Barkeep, make utility of yourself."
~ He gestures towards the hat ~

~ The bartender responds, a bit put off by this man's unusual behavior, and makes it clear that equitable social exchanges guide his actions ~

{Kentrahl} "Monetary sustenance? I regret, charity is rare."
~ He sighs, and lays a platinum on the bar. ~
" Here's that to which the world obediently imprisons itself to. Now.. for cheerful festivity!"
~ He gestures again with his fingers ~

~ The man behind the counter sighs, picks up the hat - and the money - and places it on his head (the hat that is, not the money). ~

"Dance, contort, twist, bounce!"
~ The bartender raises an eyebrow ~
"Abandon thought! Time wastes whilst your inferior intellect spirals within. What purpose, but of that hopeless umber leaf clutching defiantly in autumn breezes?"
~ Kentrahl raises his upturned palm with fingers reaching toward the sky, as if to pluck that leaf from the branch ~
"Empty, clear, clean these coagulating self obsessions! Release it, soar free!"
~ He swings both arms out to his side, hitting a fellow bar patron, who gets up quickly and walks away ~

~ The bartender grunts in disgust, understanding little of what Kentrahl said, but recognizing clearly the words 'inferior intellect'. He sneers at Kentrahl, throws the hat and money on the bar, and goes off to serve others ~

"Silnah, ahh. Wisdom I impart, yet ears to listen I've yet to meet! I'll get you drink and meat worthy of such a day as this"

"Misguided animal, its the PATH I follow. If none wish enlightenment, then invisible shall it remain upon their glance."
~ He shields his eyes, and uses his other arm to feel around randomly in front of him, knocking over a tankard of ale in the process. He then unshields them, ignoring the spill. ~

"Ahh, vision, sight! See... reality and fiction I offer, Milnah. Truths & falsehoods.. in turns of exposition. Yet.. Blinking and blanking, faces of confoundment! What... what I offer needs effort. On who's behalf though?! Bah! Pry open their confused minds, their mesmerized hearts, and rape it with truth!"
~ He thrusts his staff into the sky with this remark, his chest raised high. Then, he lowers the staff to the ground, his shoulders slump forward and he sighs ~
"...But..ahh.. hard to the self they stay. Forever lost in a haze. Confusion!"
~ he sighs once more, his voice waning ~
"..madness.."

~ Silnah shakes its head again, wondering if sanity can be bought over the counter or if it requires a prescription. 'Chemically imbalanced?' Nah, more like chemically devoid. Alas, he is stuck with this strange being. Not that he doesn't appreciate him saving his family from certain death - but still... ~

~ Along his way on out of the tavern, the wizard touches the slug he previously held in deep deliberation with the tip of his staff, and continues walking, never looking back. Silnah, the curious creature he is, peers back and watches as the slug slowly grows thick plates all over its body and begins to sprout limbs, and finally feet.. ~

~ Kentrahl grins ~
"A purpose for all, in puzzled glory they fit!"

{psst, ignore the short stature of the wizard pictured, Kentrahl is not so lacking in height}

#3
~ Being as how the wizard had moved on, reason seems to indicate Tiger would be staring at and talking to a mere phantom image etched into his optical nerves. Alas, Kentrahl would therefore be unable to provide any cryptic worded response for the man to be confounded by.. ~